According to recent data, about half of the 21 million software developers in the world are working on mobile app development, which is over 10 million engineers.

Between that, Android is the more popular platform with 5.9 million Android developers comparing to only 2.8 million iOS engineers. With that reason, we have prepared for you the list of top locations to hire Android developers based on salary rates in 2019. Only updated data you need, so, let’s move to the numbers!

Remember we said that there are almost 6 million Android engineers in the world?

So, one might think that with all those Android developers vying for the same jobs, their salary demands would be fairly modest, as a way to maintain a competitive edge in a crowded market.

No such luck. In the United States, the average Android application developer salary is a high $81,458 per year.

However, depending on where you're looking to hire Android developers, you may not have to pay quite that much to get talented coders on your team.

Looking at the other end of the pay range, cities like Orlando, Florida and New Orleans, Louisiana pay their Android developers closer to around $70K per year, but that's about as low as it gets in the US.

Android developers pay overseas is another matter entirely. A country that comes close to the US in Android developer pay is Australia, but at $58, 236, even those salaries are around $20K short of US pay. Most countries have Android developer salaries that are even lower than that. In the Philippines, Android coders only make $7,436 per year, and in India, the average salary is only $4,355.

This article will dig a little deeper into the different Android developer salaries you can expect to pay based on where you do business.

We've found some interesting salary data for various cities in the US and for countries around the world. We focused on cities and countries that would reflect the salary extremes, and also tried to draw your attention to places with more moderate salaries for Android developers. 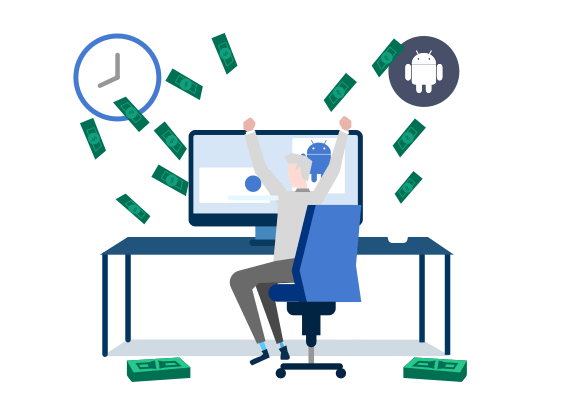 To kick things off, let's find out where most Android developers ply their trade and explore whether it has much impact on what they get paid.

Where Do Android Developers Live, and Does it Matter?

The global distribution of Android developers is relatively even, with Asia, Europe, and North America each accounting for approximately 30% of the total mobile app developer population.

Within the US, there are a few places with a high concentration of Android developers. Silicon Valley in California is home to many due to the fact that it's where some of the world's largest tech companies do business.

Another example of a US location that has attracted a lot of Android developers is Raleigh, North Carolina. It's home to Research Triangle Park and a long-time favorite location for small business incubation.

App development costs will vary quite a bit based on where you're hiring. In the US and Canada, two of the most expensive countries for Android app development, coders can charge much more than they could in other countries.

In Eastern Europe, Android developers' salaries average around $30K. The typical Android coder in the UK expects to get paid a bit over $45K annually. Android developers in India typically make only $4,355 per year.

With the recent increase in companies hiring remote developers, one might think that hiring a developer who will work from India, regardless of where your business is located, would be the cheapest option. As it turns out, that is not a safe assumption. From a pay perspective, remote work has split off into its own category.

UpWork, the world's largest freelance marketplace, reports that an entry-level Android developer can be hired for between $15 and $40 per hour. The upper end of that range equates to $83,200 annually, which is actually a little over the national average.

An intermediate to advanced remote Android developer could cost you well over $120K per year.

Even at those higher prices, however, hiring a remote Android developer might be the way to go. You'll get access to a massive global talent pool.

If you live in a place where it's hard to find qualified candidates for your Android development jobs, hiring remote coders could be the only way to staff up for your mobile app development project.

Android Developer Salaries in the US

Here is a snapshot of Android developer salaries in various cities around the United States. This group of cities represents low and high extremes, and also highlights several cities where salaries fall in the middle of the range. 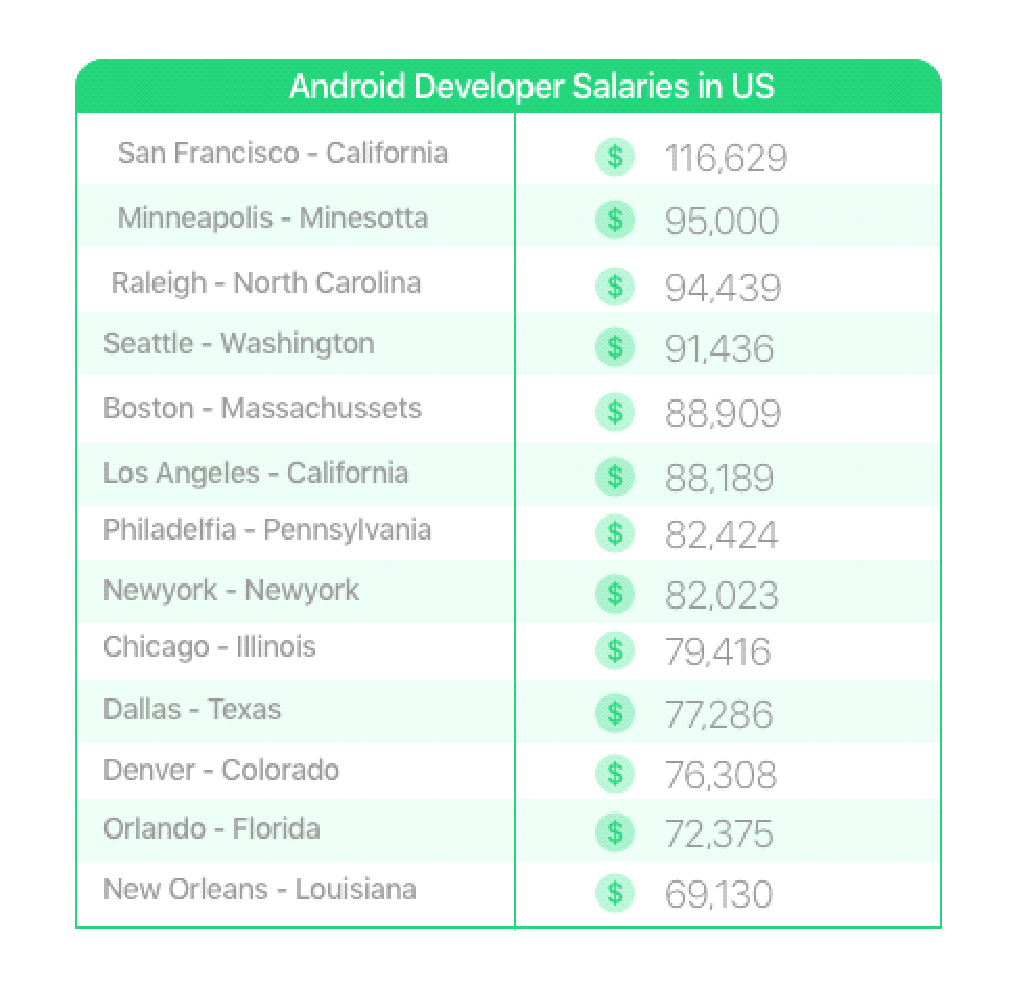 Regardless of their location, the amount of experience a developer has can make a big impact on their pay. In the US, the average entry-level Android developer salary is $77,920, approximately $3K lower than the overall average.

Nevertheless, a coder with even minimal experience can expect a salary that's very close to the national average. An average junior Android developer salary is around $80K.

Salaries also vary based on the technology that a developer has focused on.

That's a fact that's plain to see when we look at average Android developer vs PHP developer salary. The average person who has learned how to use PHP, the popular general-purpose scripting language, will only be able to pull down about $62,655.

Android Developer Salaries around the Globe

As we've seen, US-based developers can expect to enjoy somewhere near the standard Android software developer salary of a little over of $80K, but developers overseas do not earn as much for the same services.

For example, according to PayScale data the average Android developer salary in Australia is $58, 236, well below the US average.

In nearby Ireland, pay is lower; a typical Android developer salary in Ireland is $41,083.

Android developers in India can earn more if they gain experience and live in a large city. For example, the average senior Android developer salary in Bangalore is $5,706.

In the United Arab Emirates, coders get paid better than their counterparts in India, but not as much as in some other countries. The average Android developer salary in Dubai is $32,451.

An Android developer in Canada can expect to be paid $49,352 per year. The rule of increased pay in larger cities holds true in The Great White North—the average Android developer salary in Toronto, Canada is $51,044.

Oddly, in India, salary trends based on the developer's technology focus do not align with those in the US. The average salary for a US-based Java developer is about $8K less than the general Android developer pay average.

Below, we've provided a snapshot of top 8 regions where most part of Android developers live. Also, we’ve indicated the average Android engineers salaries in that locations for 2019. 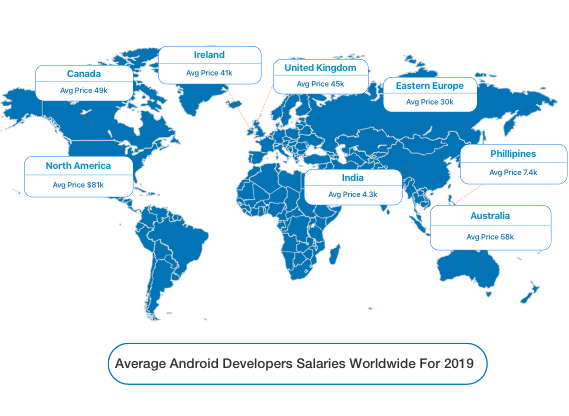 It is worth to add, that countries were selected to show the high and low extremes as well as to point out some countries with midrange salaries.

As you can see, there's a very wide range of developers pay around the world. If you run your business in one of the places where average pay is moderate to low, then, budget-wise, you'll be in good shape when it's time to put together a development team.

Android Developer Salaries in the Future

The U.S. Bureau of Labor Statistics says that the software development field, as a whole, will grow by around 31 percent by the year 2026. They have also figured out that an additional 255,400 development jobs will come into being by 2026.

Salaries will go up. Software development managers will have a large pool of candidates to choose from, for a very long time. However, it's smart to anticipate the fact that projected demand for Android developers will lead to a corresponding rise in the salaries those coders expect to be paid. 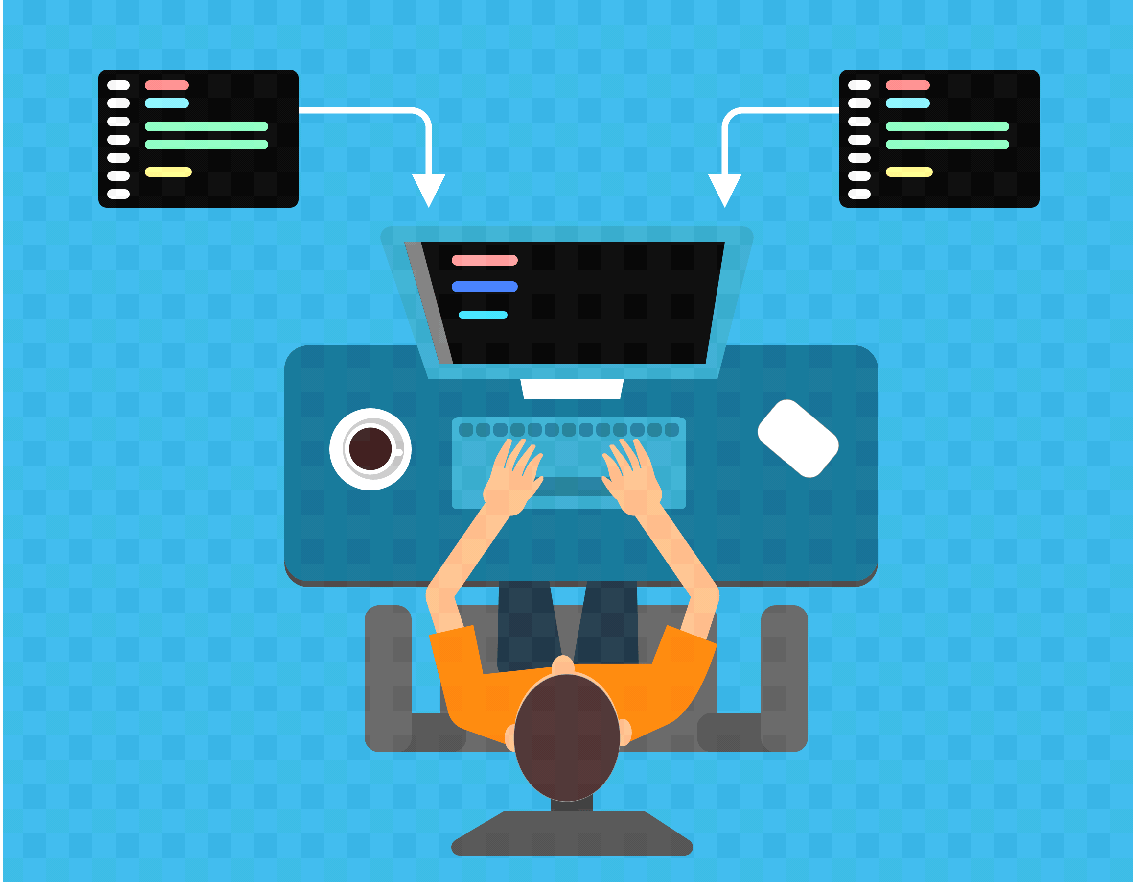 In this article, we've examined some fascinating (and surprising) statistics. There's no doubt that some places in the world have much lower Android developer pay than others.

If you live in the US, you'll pay a lot. But, only about one-third of the world's Android developers live in North America. The other two-thirds are in Asia and Europe. You can pay much less if you're running a mobile app development project outside the US.

As there is a pretty time & cost-effective option to outsource your project, Softermii team can solve your task.

So, don't hesitate to drop us a line about your project and get answers to all your questions.

While it might not make sense to pick up shop and relocate to a place where low Android developer pay is the norm, we bet it at least crossed your mind as you read this article!

Whether you take such a drastic step or not, knowing what Android developers expect to get paid is extremely useful information to have.

We sincerely hope this article has shed some light on average salaries for Android developers and that helps you make competitive offers and lock down the developer talent you need.

Feel free to share this article on your social media if you find it useful!