David Yeom, co-founder, and CEO of Hollar got the inspiration for this digital marketplace from his early childhood when he regularly inspected bargain-priced merchandise for his mother. Since 2015 he does the same but on a much grander scale, having set-up the first Hollar online dollar store that seemed not feasible by the brick-and-mortar competitors. Regular dollar stores are thriving, but the online niche was up for grabs. And taking a bite out of the 80 million loyal bargain shoppers is too strong a temptation.

“Brick-and-mortar dollar stores are all about letting the customers in on the joy of discovery of items at reasonable prices. To provide this experience online we needed a well-thought-out website and app as it’s not just about offering $1 sales, but offering experiences that won’t break budgets”, states Yeom.

For the past 2 years, Hollar is successfully filling in that void online, having surprised companies like DollarTree that have physical stores with a discount inventory that is profitable to manage.

Hundreds of thousands of products have been already sold and shipped to customers throughout the US. They range from everyday necessities to things people never thought existed. That would not have been possible without a simple UX, and straightforward browsing that dollar stores must have.

Re-create Hollar’s ease of use and intuitive Pinterest-like design in the mobile app.

From the start, Hollar offered a website and a basic app. To achieve high mobile app downloads and get great retention rates in iOS and Android App stores, they required professional software development services that Softermii could offer on short notice.

The Hollar team made it clear from the start that for the app to be successful it had to encourage and appeal to a specific target audience to browse through the key offers. The experience should be quite similar to its web version that resembles a physical shopping.

Softermii had to account for the dozens of ever-changing best-seller items that had to be shown on the home screen. The reason for such showcasing is that 90% of both Andriod and iOS users that download the app have no specific item they want to purchase in mind. One of the ways to tackle that on mobile is to make them scroll and even “like” items and see those that gross the most “likes.” It adds a feel of Pinterest to shopping that is highly praised by the young female target audience.

Eddie Rhyu, Hollar’s Head Creative said that the Pinterest model adds a charm of simplicity and community to the bargain shopping. Such similarity on mobile appeals to Pinterest-fans who are for the most part millennial moms. And namely, they make over 80% of Hollar’s purchases.

Softermii had to work hard and cooperate with in-house designers to provide such a versatile experience that is easy to recognize. We came to Hollar with an aim to refresh its mobile system, while preserving complete access to all features and offering a cleaner and updated look that is resilient in the future.

“Softermii made it incredibly easy to use the app and browse through the offers. I love how you can skim between various items while preserving great usability and speed to boost sales.”
– Marketing Manager at Hollar

The customer base of Hollar, namely, the new moms migrated to physical dollar retailers out of financial necessity. Although the economy has largely recovered, most of them continue shopping for quality bargains. Such customers want to see a good deal that has value to them compared to other stores. And shopping online adds to that convenience.

The idea behind a new Hollar mobile app was quite simple: Softermii needed to create a mobile shopping flagship. The execution of this idea, however, was tricky.

Initially, Hollar had an MVP Android and iOS app app that offered limited functionality to its clients. It allowed its clients a basic way to buy merchandise. But after extensive talks of the Softermii team with the company’s owners, it was decided to implement a better UX and a more effective app platform to push mobile sales growth.

We chose to start with key improvements and added new functionality, such as utilized Android Instant Apps by Google to offer the client a native android app without the need to install it to try it out. By offering fast and beautiful UI, high performance, as well as advanced capabilities with just a finger tap, we expected the usage of Hollar instant app to go up almost instantly. 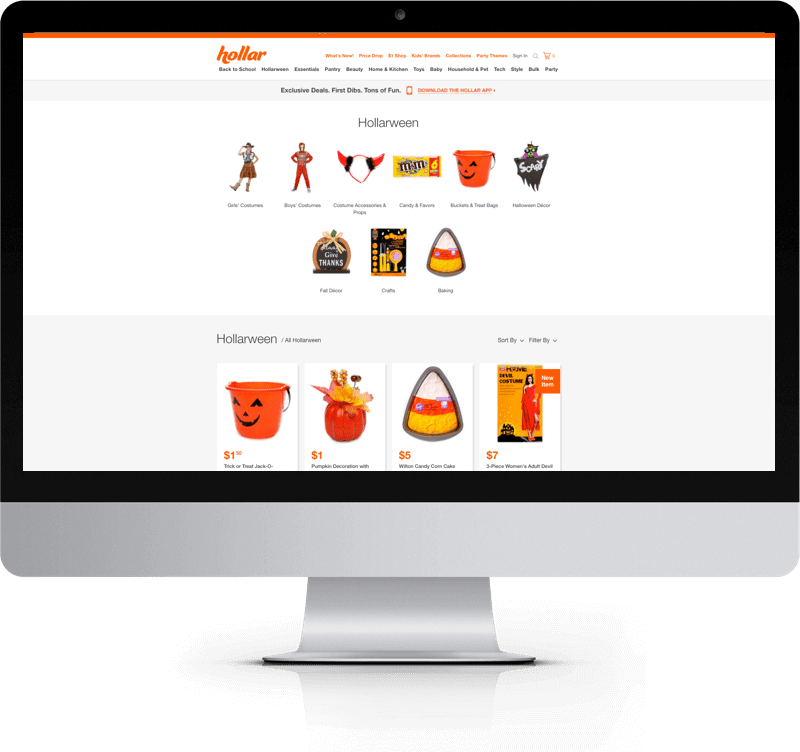 With a new attractive layout, as well as top-quality products on offer, Hollar mobile customers have a large enough choice required in online shopping to become the go-to stop for Gen Y young mothers. To achieve that Softermii had to update the mobile catalog to feature thousands of SKUs in varied categories of products on iOS and Android.

“The quality and amount of work done on our app by Softermii are amazing. Within months the mobile look of Hollar changed for better.”
– Head of Design at Hollar

“The new Hollar shopping app is dangerously addictive. The prices are low, and I find myself adding more items to my shopping cart every minute,” according to a young stay-at-home mom from Tennessee. Such positive feedback was achieved thanks to a redesigned native app. We redeveloped its core functionality and made an emphasis on boosting the core brand experience.

To bring Hollar users a pioneering and premium content we, due to our team extensive experience in mobile app development, added the following features to the app: