How much does back end development of a website cost?

That's a question that many business owners ask themselves at some point.

The answer is all about the salaries you pay your developers.

Actually, hiring a back-end developer, that is, one who can construct your data architecture and define your business logic, meant straining your development budget. Those coders have always been paid more for their expertise, and there's no way around that.

However, depending on where you do business, you might not have to pay as much as you think to staff up.

The average back-end developer salary in the United States is $128,333. 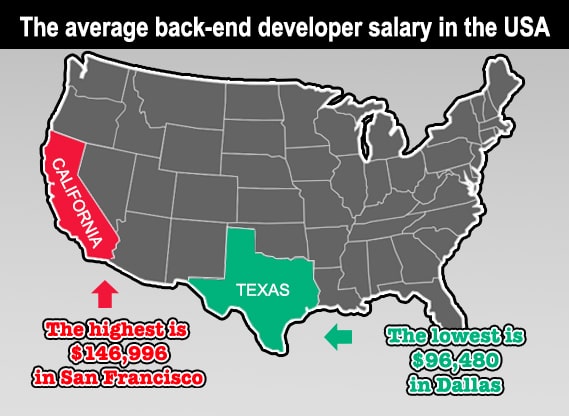 When you're trying to hire a back-end developer, you may be competing with companies that have more resources at their disposal. To attract top talent, you'll need to be sure you're offering a competitive salary. To that end, it's good to know what back-end developers in your area will expect to be paid.

Back-end web development cost can also vary based on the skill set of the developer, for example, it matters a great deal which back-end programming languages a coder is familiar with. Factoring that in will help you plan for the right payroll numbers.

To put the data into context, we've included some specific details about what to look for when hiring a back-end web developer, and how a developer's experience and specialization can impact a website coding salary.

They define the structural foundation for your application—the code that lets your site take in, process, and distribute your program's data. A front-end developer is focused more on the user interface.

There's also a difference in front-end vs back-end developer salary.

They ply their trade with the use of web development languages like Java, C#, Python, PHP, and Node.js, working with the sophisticated frameworks provided by Ruby on Rails, Django, or Laravel.

A good back-end developer has an in-depth knowledge of SQL and can work with popular databases, including Microsoft SQL Server and Oracle. Moreover, the engineer should be aware of the newest technologies in web development. 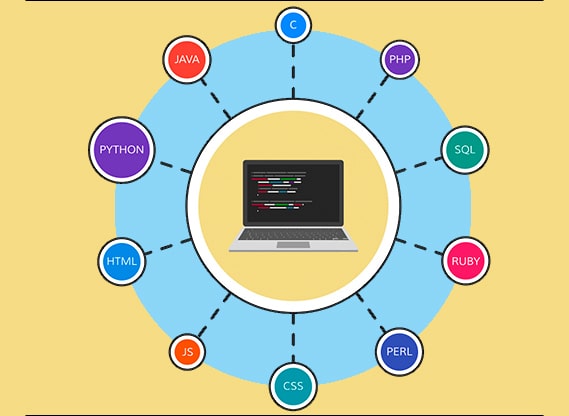 The cost to build a website can vary hugely based on your business nature and your project special requirements.

When you're looking for a web developer for hire, the technical details of your project will have a lot to do with who you interview. You may need PHP developers, ASP.Net developers, or Python developers. Every developer has their area of expertise, and you'll need to find one with a skill set that matches your needs.

If you want to take a turn-key approach to web development, engaging a coder who can take care of the front-end and the back-end, you'll be interested to know that the cost to hire a full stack web developer is, on average, $113,582 per year in salary outlay.

Knowing the significant difference in front-end vs. back-end salary, and with a full understanding of the skill set that a back-end developer needs to have, you've got a handle on some critical factors that will be involved when it's time to find a web developer for hire.

Back-end Developer Salaries in the US

Average back-end developer pay in the US is $128,333. It can vary a lot depending on the city where you're hiring. Typical annual salaries for back-end developers in San Francisco is especially high, coming in at $146,996.

It seems that most of the state of California has higher-than-average pay for back-end developers. The average back-end developer salary in Los Angeles is $129,352. In San Diego, web development costs more than many places in the country. Coming at 8% above the national average, that city pays back-end developers $132,570 per year, on average.

It's not all that surprising that California, home to Silicon Valley and some of the world's largest tech companies, would have higher average developer salaries. The area attracts top talent and is a hotbed for innovative startups.

Areas that are less technology-focused, like New Orleans, Louisiana, for example, will have fewer qualified candidates, but those you choose to interview will expect less money than their tech-city peers.

The table below provides a snapshot of back-end developer salaries in various cities around the United States. 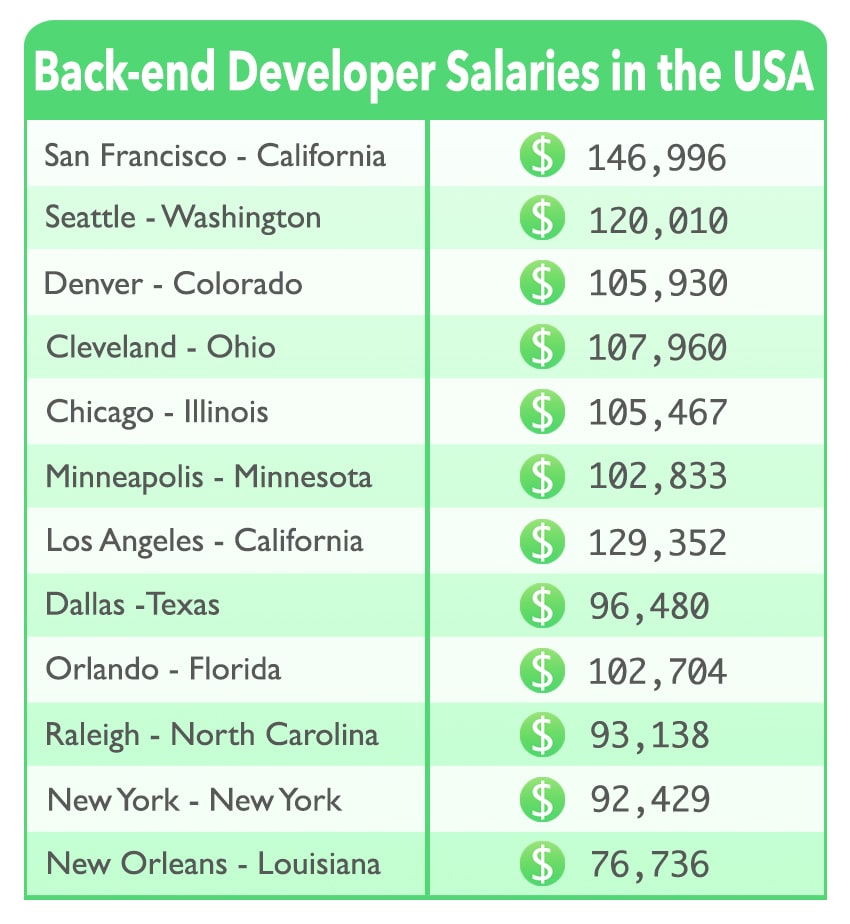 If you're hiring in one of the cities with higher pay, it will be critical to offer qualified candidates a competitive salary for the area. If you're lucky enough to be in one of the cities where back-end developer pay is lower than the national average, you'll enjoy the budgetary benefits of paying your new hire less than your competitors would have to.

Maybe you're interested in hiring a remote developer. It's a common strategy to find back-end developers for startups.

You may have to throw out your expectations about developer pay when you start to consider hiring remote. From a pay perspective, remote work has evolved in its own separate economy.

Freelance software developer rates, according to UpWork, the world's largest freelance marketplace, are quite a bit higher than the rates of on-site coders.

Custom programming rates, in particular, are high in the freelance world.

There's a growing trend in hiring remote coders, and, clearly, you can't expect a discount when deciding to hire a freelance back-end web coder for development of your e-commerce solution. Nevertheless, for some companies, it may still be the way to go.

Plus, if you do business where it's hard to find candidates, or where pay rates are through the roof, hiring a remote developer is a viable approach to staffing your project.

Back-end Developer Salaries Around the World

This section looks at back-end developer salaries in other countries, but before we dive into that topic, you should recall that the average back-end developer in the US is $128,333. By international standards, that's high, as our brief overview illustrates.

There are a few countries that come close to paying back-end developers as much as they make in the US, but, considering the  United States' position as a global tech leader, it's not surprising that it would have the highest developer pay, with less technology-focused countries lagging behind.

Another overseas locale where it costs less to employ back-end coders is the United Kingdom. The average back-end developer cost in the UK is $64,169 per year.

A company can save a lot of money on back-end web development by hiring in India. The average back-end developer salary in India is just $2,977 per year! 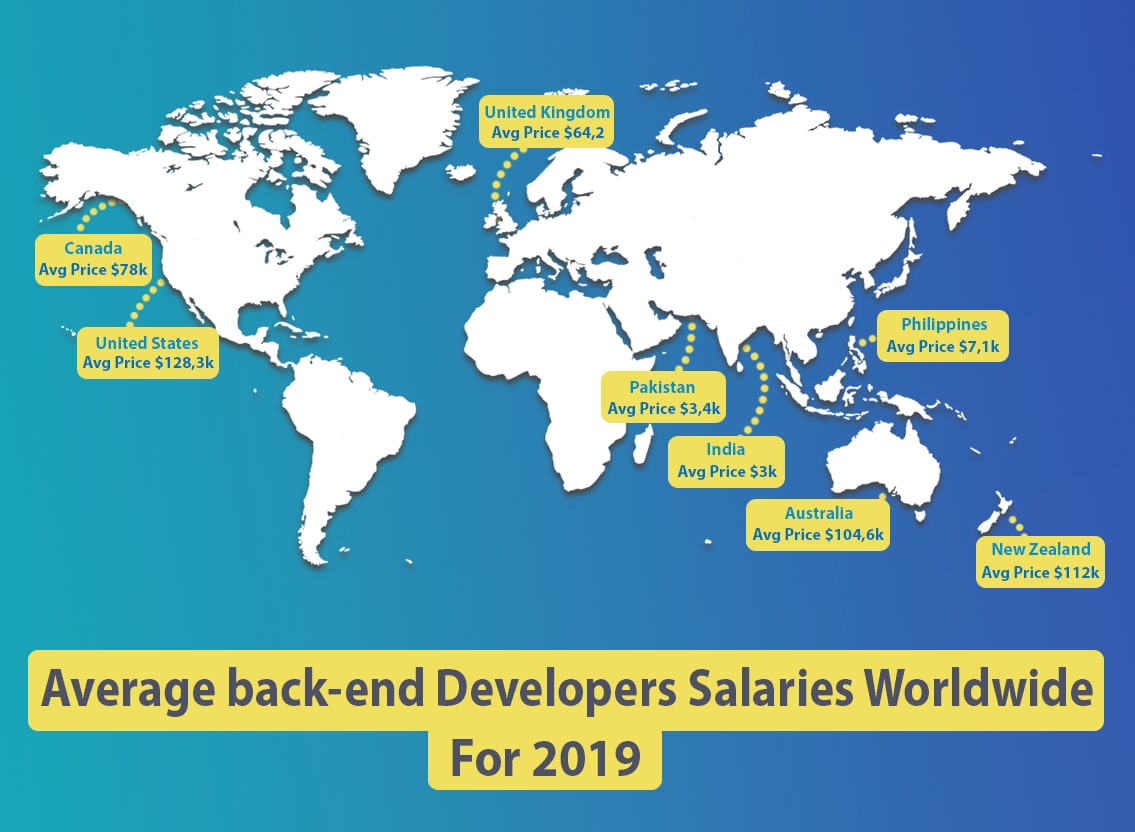 As you can see, there's a very wide disparity between back-end developer salaries overseas and those in the US. If your business is located outside the US, you might need to pay your back-end developers considerably less money than you would in the US.

Back-end Developer Salaries in the Future

According to the U.S. Bureau of Labor Statistics, the software development field will increase by around 31 percent by the year 2026.

The growth statistic cited above is a national projection. There are places where the expected growth of software development is even greater. For example, in Texas IT field is on track to grow 33 percent by 2026 , and in California, statistics indicate the field will grow by 40 percent.

The Bureau of Labor Statistics has also predicted that additional 255,400 development jobs will exist by 2026.

Software company hiring managers, business owners, or startup investors who are hiring a web developer can look forward to choosing from an ever-growing pool of qualified candidates, for a very long time. But, it would be wise to consider the fact that the projected increase in Web developer demand will lead to a corresponding increase in developer salaries.

When you need a developer with the ability to translate business requirements into functional code, you need a back-end developer, and you must be willing to pay a little more for the required skill set.

In this article, we've examined some interesting statistics. It's clear that some locations in the US, and overseas, have much lower back-end developer salaries than others.

A company that wants to save time and money on their project implementation should consider outsourcing the web development of the project to an experienced web development company.

For example, by engaging the talented team of web developers at Softermii, you could save as much as 30%-50% in your development budget. Going that route can also improve your time-to-market, enabling you to get your site up and running much faster than if you hired an internal team.

Before we close this discussion about the average web application developer salaries, we'd like to take a moment to acknowledge the great web source Indeed from where we gathered a lot of the data in this article.

Whether you're hiring in the US, overseas, or remote, knowing the average cost to hire a web developer is extremely useful. We hope this article has enlightened you about average salaries for back-end developers and that it helps you attract the top talent needed for your project.

How to Set Up Software QA Process From Scratch

How to Set Up Software QA Process From Scratch

Cooperation Models for Software Development: How to Choose the Right One

Guide on How to Build a Podcast App

How To Build A Music Streaming App: A Comprehensive Guide