The change in technology is constant and multifaceted. It’s in users’ expectations and evolution of programming philosophies, together with the growth of computing hardware. All this keeps raising the standards for acceptable levels of performance contributing to the rapid evolution of software architecture. When it comes to web development, it is important to be aware of the latest trends in information technology and use the best frameworks applicable in your individual circumstances. We always stay on top of the latest events and releases in the world of IT. Here we present our roundup of the most promising technology in web development that will be relevant in the coming years.

We begin our overview with leading back end technology. Server-side development involves a lot of knowhow in terms of stack and database choice along with server architecture. It’s not necessarily the latest web development technologies but those which show the most promise combined with good progress over the past years. Without further ado, here is our selection in terms of the leading back end technologies:

Based on Chrome’s V8 JavaScript engine, Node.js is an entire runtime environment. As JavaScript is the undisputed popularity contest winner among the coding languages, it is widely used for server-side programming. One of the instruments to make this more feasible is Node.js. It was instrumental in creation of Netflix, LinkedIn, Trello, Uber, Medium, eBay and PayPal. It’s even used by NASA!

Node.js grants extensive amounts of flexibility to your team and renders the development process much more streamlined with performant and durable software in the output. All due to the perks like enhanced code sharing and reuse as well as knowledge distribution among the team members.

First and foremost, Node.js is event-based and works quickly. The synch is very fast which is perfect for event-based real-time products. These are online games, chats or conferencing products that need a rapid update stream that works so well due to the asynchronous, single-threaded nature of Node.js.

Instead of a unified core that governs all the processes, Node.js builds your product with independent microservices which can simply be stacked one upon another without issues, with entire new features integrated that way.

Founded in part by Joyent, the leading world companies using Node.js including IBM, Microsoft, PayPal Fidelity and SAP have created an international association based around this technology. The purpose is to increase the global adoption of Node.js. Nowadays, more and more huge brands are using Node.js which is largely unprecedented in case with open source technology. All due to the viability of Node.js applied in juggernaut projects.

Ruby on Rails or simply Rails is a straightforward coding language with its own robust ecosystem of custom packages. The community is constantly contributing code to RubyGems. Used for a varied array of purposes by companies like GitHub, Shopify, CrunchBase, Airbnb and Twitter this framework is the most applicable for rapid development and prototyping. One of its strongest suits, is the data migration functionality and how Ruby on Rails lets you manipulate the database at your own whim.

As a language, Ruby is object-oriented. In addition to a vast open-source code library this makes the writing in Ruby on Rails much faster than with any other potential competitors. The framework is favorable towards changes and it fits well for rapid application development. Also, Ruby on Rails is very much test-oriented with great frameworks available for testing.

The conventions of Ruby on Rails allow to easily move between various projects because all projects share the same structure and style of coding. Aside from that, the code written in Ruby is self-documenting so no need to deliberately write the documentation. It is easy to pick up a project after a different person.

Despite some minor complaints in dev communities about the code volatility, right now, Ruby on Rails is used by 1 076 238 active websites including WhitePages, Urban Dictionary, SoundCloud and many eCommerce platforms. There is no obsolescence for Ruby on Rails for the coming years. It holds its niche strongly with 30%-40% higher development speed and huge utility, seeing no realistic competitors.

.NET is a backend framework and ecosystem by Microsoft designed to create desktop and web applications. It is especially useful when creating products that need web-based services and cloud infrastructure support.

.NET is object-oriented. It compartmentalizes all information into objects and identifies the behavior by declaring classes. .NET has great caching. It is reliable, simple to use and extensible. It provides all the tools to write the code and Visual Studio IDE. .NET makes the deployment both flexible and easy. Plus, you can have many versions of .NET core running on the same computer to work on multiple projects and do deployment. .NET Core is open-source with a large community of devs who can help with common issues.

Right now, .NET Core, the latest iteration of .NET, is seeing major improvements with each new release. Microsoft keeps making it more and more feasible to transition into .NET Core from other languages and frameworks. Many argue that it is becoming the global standard for new development efforts within the .NET ecosystem and we agree.

When it comes to front-end website development technologies, there are many considerations as well. It’s about visuals, database management, website services and much more. Dealing with all the elements is made easier with a number of frameworks. Here are some of the best ones in front end web development.

Powered by Google, Angular is a highly productive front-end framework written in TypeScript. It works great for creation of responsive web applications. JavaScript is still to this date one of the most popular web development languages and Angular works great to streamline your work with it. Its main significance is that it allows to turn HTML documents into dynamic content which used to take too much effort with any other possible means in the past. From version 4 to version 7 and onward Google has been keen to augment Angular with significant improvements. Today, it is used by HBO, PayPal, Upwork, Google itself and many more.

The newest versions of Angular have a number of distinctive positive qualities that make it so good for front end. First off, the architecture is component-based and these components are highly reusable, readable, maintainable and unit-test friendly. This allows for a much increased standard of code. TypeScript provides better instruments, scalability and code structure with higher efficiency and asynchronous programming via RxJS. Thanks to the hierarchical dependency injection, Ivy renderer and Angular Universal support it allows an exceedingly high performance which is a very significant competitive advantage both on desktop browser web and web mobile. The Material Design interface engineering is made much faster and easier via Angular Material. It gives you pre-made components that are adjusted for Angular and integrated with ease.

Angular CLI, command line interface is easy to understand, setup and comes with in-built testing tools. It even analyzes the package and makes recommendations for potential updates in terms of dependencies. The overall ecosystem of Angular is robust with many packages, add-ons, IDEs and UI environments. Also you can reuse components from different projects and apply them in multiple environments by wrapping them as DOM elements.

In general, Angular is great for the especially sizable projects with major capability to organize the work of large teams. Its complexity and steep learning curve is payed off with great tech support and maintainability. Even though Angular is very opinionated due to type safety and modular CLI along with built-in data streaming, it will continue to gain traction in the coming years. Angular is very widely adopted by huge scale enterprises. As far as web development trends go, Angular is supported by Google which officially plans the long-term support of the technology and officially ceases to introduce breaking changes. This alone tells a lot about the prospects that Angular has for the coming years.

React is a JavaScript library that was founded by Facebook in 2010. It is an open-source technology used in website development, showing great capability for creation of dynamic user interfaces. It is adopted by such renowned products as HipChat by Atlassian, Khan Academy, WhatsApp, Netflix and Yahoo!

ReactJS Virtual document object model (DOM) together with great object reusability dramatically increase the development speed as well as the user experience of your developers. One direction information flow via downward data binding ensures that changes in child structures don’t affect parents which makes the code stable. ReactJS has great community support with sizeable base of instruments that is not limited to only Facebook goodies.

The same applies to Redux, the state container of React. Redux makes management and keeping of component states in sizable products much more simple. It stores the state in one object and lets components reach out to it without having to use callbacks. As the states become more manageable the data change logging and testing capability is becoming dramatically more viable. Additionally, Redux allows hot relog and other useful functions.

Overall, ReactJS is applicable for smaller projects that don’t require the enterprise-scale volumes of work to finish them. It has great deeds ahead of it with plans for rearchitecture, plus changes in threading asynchronous rendering and other aspects that will greatly improve it in the coming future.

Here is our forecast for the most promising web development technologies enjoying great popularity for the next 5 years to say the least. We absolutely vouch for these frameworks and always continue to discover how these tools keep changing. We love seeing how much further we can push the technology as they grow. Our team uses the above frameworks on daily basis and they allow us to build great things with efficiency. Our hope is that this overview will help you make all the right calls when it comes to planning your next project. Please make sure to check our portfolio and Clutch page. 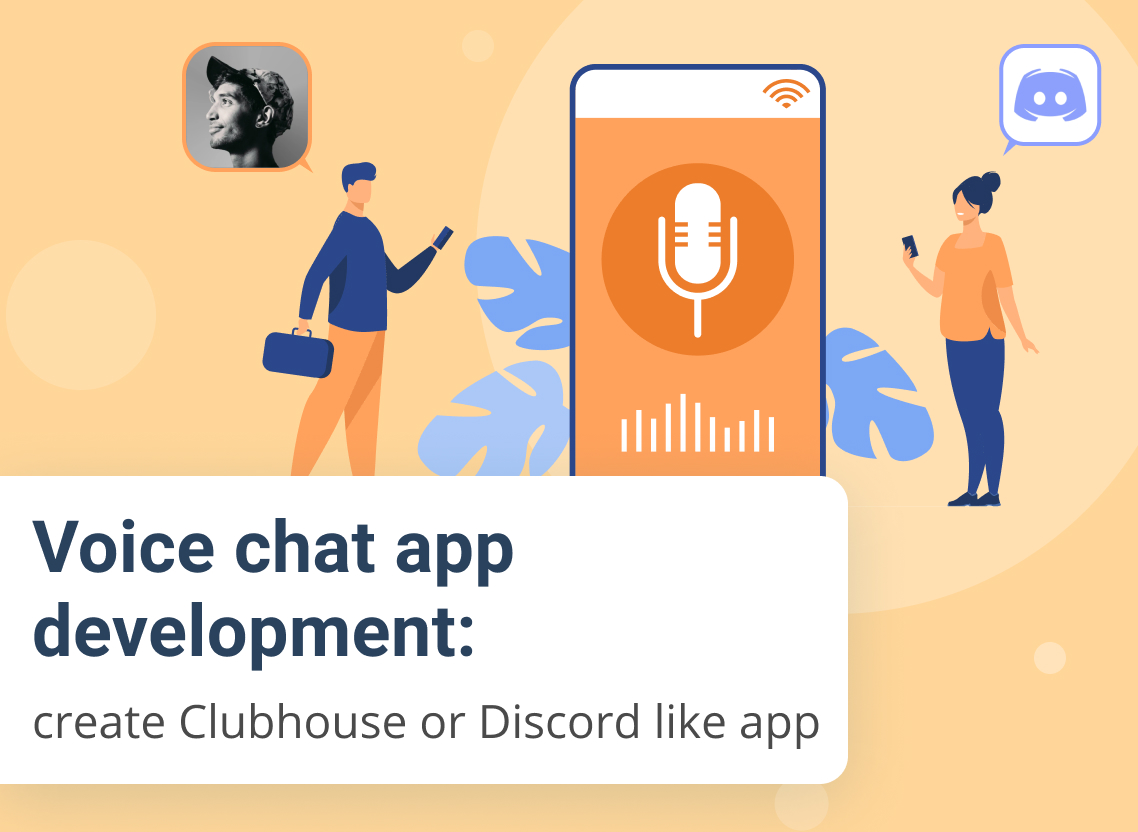 General
Best Media Server Frameworks: Tips how to choose one for your needs [2021]
Slava Vaniukov
5 (6 users)